After months working on Rideminder, I have moved him for Version 2 to Version 3.0! He now has added functionality to provide transit information to Cal-Train and Bart, as well as the original SF-Muni (check out how I seeded my database and reconstructing by back and front end).

I ran the code in the terminal and all my data started moving from my local database to my heorku one! It just kept going! 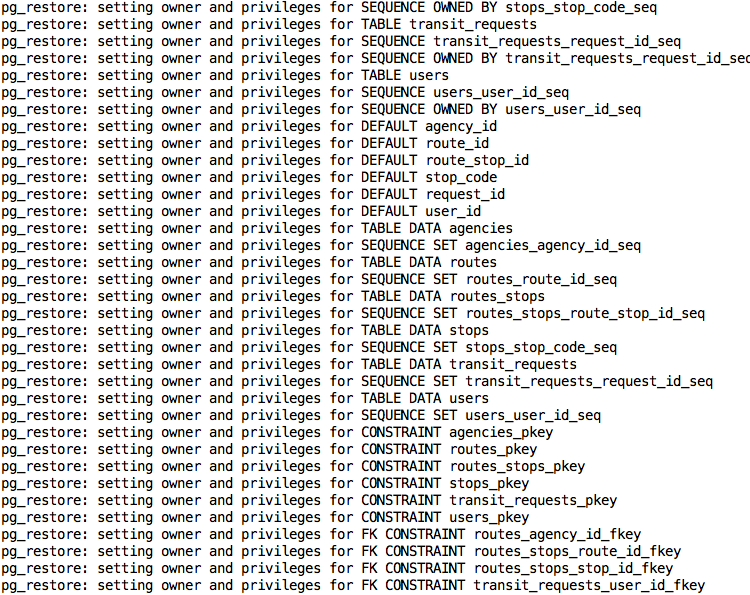 Now it’s pushed to heroku! My json worked effortlessly and I was able to submit my request. The only thing is that my server kept giving me 500 errors. I threw some print statements on my server so I can see what is happening, and my server processes things until the gets_user_itinerary function and then sends the 500 error. So I set gets_user_itinerary to a default string of numbers and when I made the submission it still gave me a 500 error, but it printed out the functionality until user_db. So I suspected that it may be the same issue that I had on version 1, where my server was handling too many processes and times out. So I had to move parts of my data processing to my celery to take care of — similar to what I did for version 2 moving functionalityfrom Server to Celery.

I also updated Rideminder cosmetically with a wonderful logo that I got from Fiverr  and I tweaked the design to have a better UX.

I also added 500 & 404 pages! I added errorhandlers and html so when there are sever or resource not found errors, Rideminder has custom pages that show to the user!

I’ve been waiting to change the favicon for months but I hadn’t had time to research it since I was so focused on the backend. I looked up flask’s docs for favicon patterns and it was simple! I wish that I had done this earlier!

I finished up editing my test.py and I current have 80% test coverage. I had to pull out all the test that reference firebase and the functions that I had before and write new test. I ran my test and it went from 52% to 80%. But now he is somewhat tidied up!

This is the last thing that I am working on Rideminder for. I have turned Rideminder into Rideminder Lite and he will not longer do the functionality that I built him for on heroku (it will not process requests and message users). I decided to remove it because the maintenance of public transit data is constant. All the code is still up on my github. I have learned a lot from working on him, but I am ready to let him go and start working on tons of other projects. This is my first web app and I am so proud to have had the support, endurance and joy it took  to take him from an idea in November to having him at version 3.